One of the most challenging areas of work in a certified EVMS (Earned Value Management System) is the process for managing major replanning events. Known as a Single Point Adjustment or SPA, EVM professionals find these very complex, time consuming and often nerve-wracking. They must be planned very carefully and thought out in detail, lest some calamity befall the unwitting team.

For those less familiar with the terminology, a replan is something very different from a baseline change, although that is basically what’s happening in both cases. The difference is one of size. Baseline changes are common events that typically keep the Deltek Cobra cost analysts and project schedulers busy whenever they are not running periodic reporting cycles. A replan on the other hand, happens when the existing baseline is now so far off base from what needs to be done to complete the work, that it can no longer supply useful metrics.

The problem with doing this is that it will zero out all previous metrics because you will typically be setting them all to equal the actuals. When you do a formal replan you quite literally set the planned value equal to the earned value, equal to the actual cost of work performed.

In other words, the baseline is now so far off from the reality of the projects original planned work that we need to throw it out and start again. A Single Point Adjustment is a way to formally hit the reset button and set your SPI and CPI back to 1.00. This can happen to the entire project, or parts thereof, depending on the parts of the project no longer in step with current events at the coal face.

As complex as this might sound, Deltek Cobra provides a tool to help us manage such change – and this tool, not surprisingly is called Replan.

Just before I launch into this example, I want you to take careful note of the following fact: the behavior of the Replan feature has changed slightly over the course of time, and this example was performed using Deltek Cobra 8.7. If you are using earlier versions of Deltek Cobra, you may experience slightly different results. Now back to the narrative.

The trickiest control accounts and work packages to deal with during one of these Single Point Adjustments are those that are in progress. To deal with an in-flight work package you must leave it at the current status date, set the prior period planned and earned value equal to the actual cost to date, and then, create a new work package that carries the remaining budget into a new baseline.

Manually this would be a time consuming and somewhat delicate process. Deltek Cobra’s Replan feature however, makes this much simpler by doing most of the heavy lifting for you. You just need to know how to use it properly.

When you run the tool you see the following dialog. Let’s talk about so of its attributes. Think of this setting as your big old work package cleaver. When you run this process, Replan will chop off the prior periods at the status date. Then it will set all the metrics to equal the actuals to date, set the status to completed, move the replanned budget into a cost class called Replanned (“so that’s what that cost class is for” – I hear you shout), and set the status of this prior period work package to ‘Completed’. That just saved you a bunch of work on just that one work package. But keep in mind it does this for the entire project, if you instruct it to do so. Excellent.

Because your project will also be populated with plenty of completed and planned work packages too, you have further options.

The first question for this might be, how do I replan something that is already planned? Good question. I will reveal that answer shortly.

Okay, this one makes a little more sense. This option is going to have Cobra dig into closed work packages and brutally equal out all their metrics to equal the total actuals. This basically obliterates all prior metrics and sets the entire project’s CPI and SPI back to 1.00.  Use with caution and never forget to do a backup before messing with this stuff.

Replan by adding an adjusting entry in the current period As the name suggest, Deltek Cobra will be moving dollars among the various budget, earned, actual, and replanned cost classes to get the metrics to equal actual cost and will be doing this only in the current period. This has the advantage of giving you a clearer idea of what actually happened during the replan process.

This also offers a rather self-explanatory ‘Extend the Work Package finish date when replanning after the baseline finish date.’ which you can also opt for if appropriate.

Now we’ll do a before and after on a very simple set of three work packages so that you can see first-hand what these settings will do for you during your replan. In the example we have three work packages, one is completed, another in-progress and a third that is still planned.

We will now replan these work packages using the following settings and observe what happens to them based on these options. 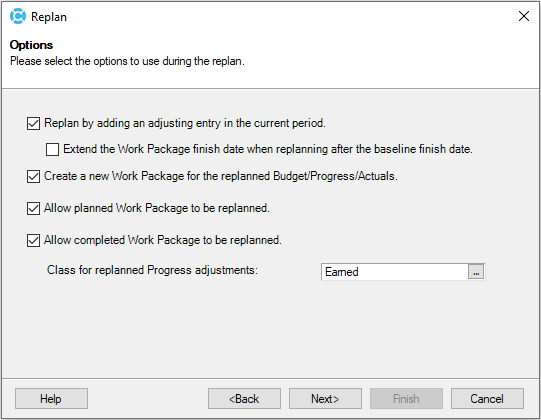 We also went with the default Method of setting Planned = Earned = Actual (as single point adjustment, sometimes known as an SPA by some more senior EV practitioners). We also used these settings in the Work Package Name dialog. Take a look at the figure below. You can see here that the ‘Before’ project has 3 work packages, completed, in-progress, and planned. When we replanned using the settings in the previous figures, we actually ended up with 6 work packages.

This work package has been copied as RP-001 and placed on a new row below the 003 Testing work package. It is still completed, but Cobra has set the Planned and Earned Value metrics to equal the Actual Cost value. It’s SPI and CPI values have returned to 1.00. The original 001 work package’s planned, earned and actual values have been zeroed out.

In the above figure you can see that the resources have been stripped off the original completed work package, moved onto the replanned RP-001 work package, set to equal actual costs, and finally the budget has been reclassed to ‘Replanned’ so that it can be tracked separately from current budget values. When you use the ‘Allow completed work packages to be replanned’ option, you are basically creating an audit trail of before and after replanning.

This work package has been cleaved in two right at the status date. The prior periods have become RP-002 – Completed, and again the Planned, Earned and Actuals are all equal, also SPI and CPI are therefore both back at 1.00. The remaining periods have become 002 – Planned.

You can also see in the above figure that the remaining budget for 002 – Planned has been spread among the remaining periods. While it’s cleaved remains: RP-002 has had the metrics set equal to actuals, and again the original past period budget figures have been ‘reclassed’ to the Replanned cost class.

I promised I’d explain this one as it seems a bit odd to replan a work package that is already planned. After all we don’t have any metrics to reset as it hasn’t started and we have no actual costs.

This example illustrates the outcome of using the Deltek Cobra built in Replan feature for Single Point Adjustment (SPA) of work packages in a project. You can filter this feature to do one, some, or all of the work packages in the project depending on the severity of the Single Point Adjustment requirement. By showing you the outcome of some of the main settings we hope this article will be useful in planning your approach if or when a replan is required.

You can also download a CMP backup of this sample project to use as a simple test project if you are planning such an event in the near future.

As previously mentioned, it’s also important to note that the behavior of this feature has changed slightly in more recent releases of Deltek Cobra. The sample you just saw was performed in Deltek Cobra 8.7. For example, there was a period of time when some Cobra versions didn’t react to the ‘Replan by adding an adjusting entry in the current period.’ option was selected.

For earlier versions we recommend you test each of the features for yourself to see how it behaves. Do this before committing to using this feature on your production project.