OK people, breakout the champagne and kick back in the oversized swivel chair. Yes, and the reason for all this joyful abandon? Deltek have today released Cobra 8.4 – well ahead of schedule!

Originally slated for release in late March, early April, this is exciting news for the team here at Ten Six. And we take delight in sharing with you some of the particulars about this new version. 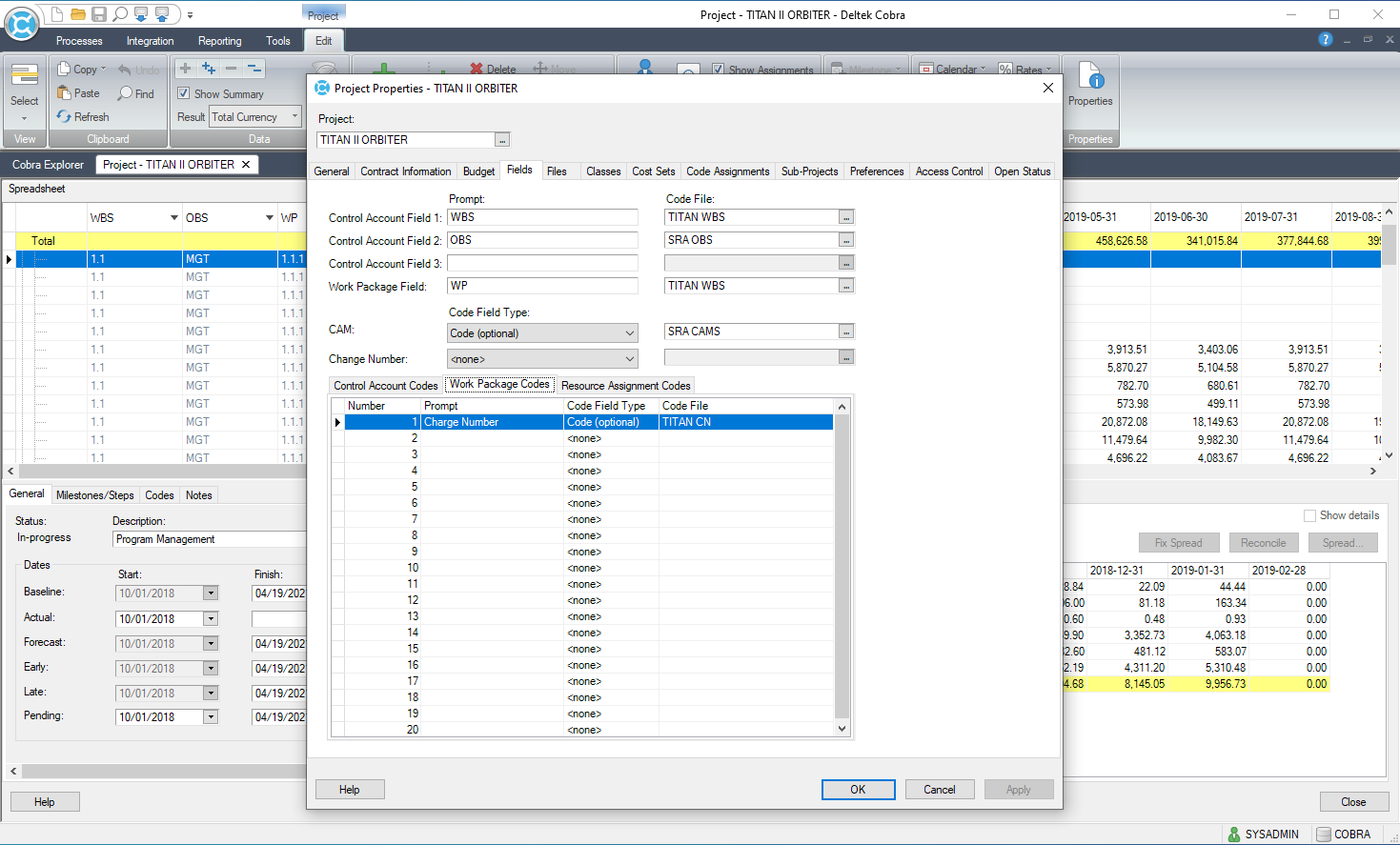 And so, with the new Cobra 8.4 come exciting new features that make this another landmark point release from the PPM team over at Deltek. If you caught our Deltek Cobra Roadmap article late last year https://tensix.com/2020/12/deltek-cobra-roadmap-2021/ or attended the 2020 Insight virtual event, then you may recall some of the following new features we expected to see in version 8.4. And here they are in this new release:

Quite an impressive list and certainly more than is possible to cover in any depth for one humble article. So I figured I’d pick a couple of the more ‘core’ features that have piqued my interest ever since Kathy Boatwright (Deltek Cobra Product Manager) announced them at the virtual Deltek Insight conference back in August 2020.

It’s worthy of note that much of this development is deeply influenced by Deltek’s customer base. In fact, since version 8.0 was launched in 2016, we have seen a welcome stream of new capabilities that have really put this tool out ahead of its competitors.

For my first ‘feature’ feature selection, I can now share with you some screenshots of the new extended codes. For decades Cobra users have had to manage with a total of 9 codes that can be added to control accounts, work packages, resources, code files and such. The good news, by popular customer demand, is that you can knock yourself out with no less that 20 additional codes for control accounts and work packages. Resource and others remain at 9 for the present, but plans for expansion are apparently in the works.

So, when you open the Project Properties dialog and go into the Fields tab, you find a slightly taller dialog, with now 20 Control Account codes… Personally, I must admit I’ve never managed to exceed the 9 on any programs I’ve been involved with, but according to Deltek, some customers have been requesting a more extensive offering for a while. I’m sure those customers will be very keen to make this upgrade.

This is one of the smaller improvements, but nevertheless, if you’ve ever worked on a project that makes heavy use of milestones, you will understand why this is one of my ‘feature’ feature picks.

The reason I find this one helpful is that I used various methods to determine what weighting values I use. On one program we used milestones as earning points for the Bill Of Materials (BOM).

We had wanted to weight the milestones using the full budgeted cost for the materials on order. However, the limitation of integer-only values for milestones was forcing us to drop the decimal points or put in a multiple of 100 to get the precision. Either way it was messy and made it harder to show the earned value to the CAMs in the way they wanted to see it. It’s a small point I guess, but even so it resonated with me when I found the new feature in the Application preferences dialog. 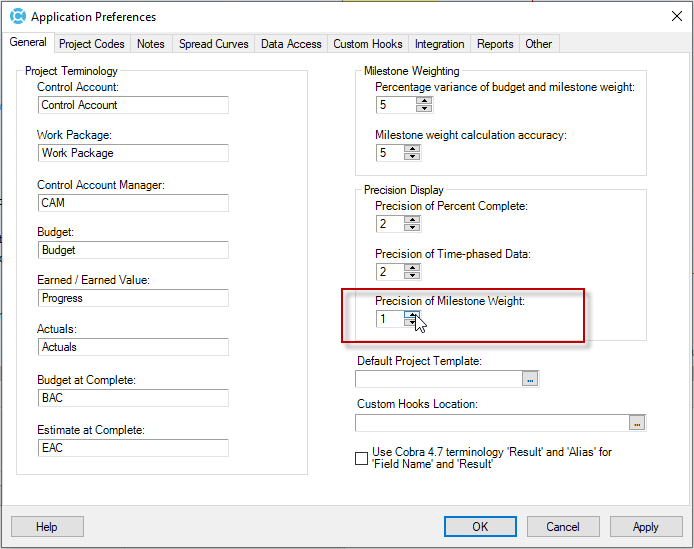 Suffice to say that you simply need to set the Precision of Milestone Weights field to the number of points past the decimal you’d like to see. Deltek Cobra offers up to and including six (6) decimal places.

I choose this one as my third ‘feature’ feature for a number of reasons. But let’s just say, the primary reason being that I love the topic of forecasts. Also it has some demonstrable components that are blog-friendly and last but not least, it’s cool.

Evidently this is also a customer requested feature. Some customers wish to calculate different work packages and control accounts using different forecasting methods. To do this prior to configurable coded ranges required creating multiple forecast classes and then running all the forecasts. Then you would have to go through a number of manual steps to concatenate the data in reports and external spreadsheets, or use filters to create a single ‘blended’ forecast data set.

Coded ranges is a new cost class you can define that will calculate a different forecast value on work packages or control accounts that have a particular value. In short, you can use values in a code file to direct the forecast method used for any given control account or work package. You can see what it does to use a code file value in the setup above. You’re looking at the new forecast method of coded ranges. The setup is pointing at the Performance Technique code file as its source.

In the table below you can see that any work package with a Performance Technique of % Complete, will have it’s forecast calculated as PF=1/CPI for the last 6 periods. When the work package is using the Level of Effort technique, Cobra calculates the forecast using PF=1 method. For all other values in encounters, the other field directs Cobra to calculate as Manual Forecast (Retain ETC).

The big deal here is that these all end up in one single forecast class, named whatever you want and using the Coded Ranges forecast method.

My final ‘feature’ feature from this selection is, the ability to run multiple project reports without the need to create and manage a master project. For some report types you will have the option to run a multiple project report without all the complexities associated with the use of a master project undertaking.

Checking the ‘Include multiple projects on report’ option adds the following dialog to the report wizard. This option allows you to select whatever projects you would like to include in the report. Once you have made your selection, you will have an opportunity in the Sub-totals dialog to select not only Control Accounts and Work Packages, but Projects as well. The resulting report shows data that has been grouped by the selected projects. In this example, we can see the TITAN II ORBITER, TITAN III, and TITAN IV projects included in the report. And yes, I totally copied the same project 3 times to create this example report, which is why the number are the same in each project. Not very realistic, but certainly proof of the concept for this article.

Take a look at the following screen shot of the final report. You can clearly see the projects listed on the far left. Once again Deltek have delivered an outstanding release making Cobra a more flexible earned value management tool. Deltek Cobra 8.4 includes some highly customer driven functionality that will serve the whole Earned Value community. We recommend you go to the Deltek Software Manager now and download the 8.4 GA files and release notes ASAP. And then you can start looking into an 8.4 upgrade for your project controls team.

In the meantime, we’ll be using Cobra 8.4 working with customers in the field seeing just how relevant and useful these new features really are for the project teams. Watch this space for more news and updates on Deltek Cobra 8.4!