Critical paths have a way of shifting on you after risk adjusting your schedule. Deltek Acumen Risk provides a way to review all the probable risk adjusted critical paths.

Deltek Acumen performs a Monte Carlo analysis on the schedule to provide a risk adjusted analysis of your schedule. Acumen was originally developed by Acumen PM, an Austin, Texas based company founded by visionary leader Dr. Dan Patterson, PMP. Dan’s thesis regarding the critical path method (CPM) is that “until you have adjusted your project for risk, you don’t know what your critical activities are.”

In Deltek Acumen, each iteration of the Monte Carlo analysis computes its own critical path. You want to view critical paths and near critical paths that become critical due to risk. Acumen has a critical schedule drivers feature that displays all the schedule’s common risk adjusted critical paths, which is valuable information.

This article demonstrates the critical schedule drivers feature in Deltek Acumen Risk to inspect all the probable risk adjusted critical paths in the schedule.

We start below, in Figure 1, with our demonstration Primavera P6 Professional schedule.

We want to include in our analysis the duration uncertainty for our schedule duration estimates, and risk events that may materialize during project execution. We therefore implement Deltek Acumen to risk adjust our schedule and perform a risk analysis. Shown in Figure 2, is our Underground Pipe Branch Addition schedule in Acumen S1 // Projects. In Figure 3, we set the duration uncertainty of all activities in the project to very conservative. A very conservative duration uncertainty means our duration estimates will be on schedule or better. In Figure 4 we have a list of our schedules risk events. Note, in particular, the Procurement Delay risk event, R3. It is probable that this procurement related risk event could place procurement activities on the critical path, after our schedule is risk adjusted.

In Figure 5, we set the Run Risk Analysis scenario to include uncertainty and risk events, but no mitigation. We proceed and perform the Monte Carlo risk analysis, Figure 6.

The histogram and S-curve results are displayed in Figure 7. Well, the risk events had a meaningful impact on the risk adjusted model’s schedule Monte Carlo results. In fact, none of the Monte Carlo iterations met the deterministic project end date. This tells us that mitigation analysis to reduce the probability and impact of the risk events would be a helpful endeavor. But we also want to investigate the most common or probable critical paths.  For this we run an Acumen Critical Schedule Drivers analysis.

As mentioned above, each Monte Carlo simulation of the risk adjusted schedule may have a different critical path. So, activities that are critical in the deterministic model may not be the same as those identified in the statistical model.

We proceed in Figure 8 and choose the Critical Schedule Drivers feature to view critical paths and near-critical paths that become critical due to risk. In Figure 9 we have our Critical Schedule Drivers results. Path 1 appeared critical in simulations 84.4% of the time or 844 times out of 1000 iterations. But we are not done yet. Another path appeared critical in our Critical Schedule Drivers tornado plot. A Path 2 appeared critical 15.6% of the time or 156 times out of 1000 iterations. Clearly Path 1 is the primary critical path, but Path 2 at 156 simulation iterations should not be disregarded.

In some situations, Path 2 could become the defining critical path of the risk adjusted schedule. It would be good, therefore, to at least consider the procurement risk event that contributes to Path 2 becoming the critical path in the schedule.

When we hover our mouse over Path 2, all the activities along this critical path display, Figure 10. 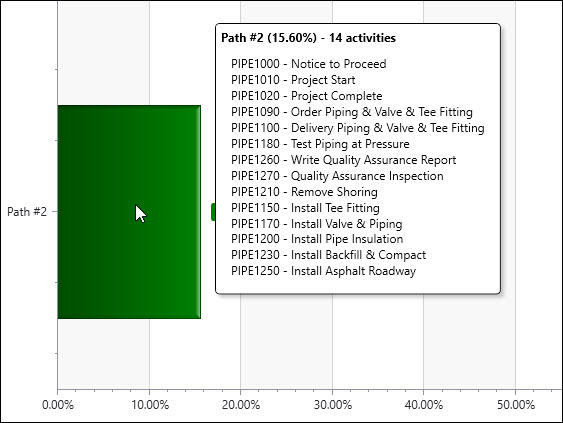 Further, when we hover over Path 2 and right click the mouse, a popup menu appears providing the option to create a SmartGantt filter, Figure 11. When we click Create SmartGantt filter the create filter dialog appears giving us the option to enter a name for the filter, Figure 12. We enter a suitable name for our Path 2 procurement critical path, Figure 13. 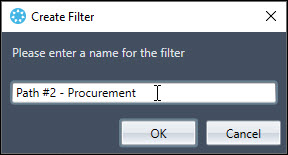 Now only those activities that appear on “Path #2 – Procurement” display in the S1 // Projects task table, Figure 17.

I repeat Dr. Dan Patterson’s mantra, “until you have adjusted your project for risk, you don’t know what your critical activities are.” And when you perform a Monte Carlo run risk analysis; each simulation may have a different critical path. As you run more simulations, some of the critical paths are repeated.