Once you have defined your tasks and task durations in Microsoft Project 2013, the next process of connecting tasks with relationships is important for finding the true length of the project. This article describes how to use the various capabilities in Microsoft Project to apply relationships to your tasks, so you can compute the overall length of the project.

Before we begin defining task relationships, let’s first make certain we understand the precedence diagramming method. The precedence diagramming method is implemented to show task dependencies. In this method rectangular bars represent tasks, and arrows between bars show task dependencies. There are four types of relationships you can use to define the inner workings between tasks.

Lags and leads also have a significant impact on the length of the schedule. A lag describes a required time between tasks. In the FS relationship this means that the second task cannot commence until a scheduled period of time has elapsed after the completion of the first task. The most common example is concrete, in which a lag is inserted between tasks to allow the concrete time to cure before the successor task can proceed. A lead has the opposite effect on the schedule. A lead is the amount of time that a task can start before the completion of the first task. Many schedulers refer to lead as a negative lag. Note that the use of leads is discouraged by scheduling guidelines. Note the milestone tasks Notice to Proceed, Project Start, and Project Complete. Also, note the summary tasks Demolition Piping, Installation Piping & Thrust Block, and Quality Assurance. These summary tasks are elements of the work breakdown structure, and will not have assigned relationships.

The first relationship we want to assign is a Start-to-Start relationship between tasks Notice to Proceed and Project Start. Highlight Project Start then select the Task tab, Properties ribbon group, and Information icon, Figure 2. 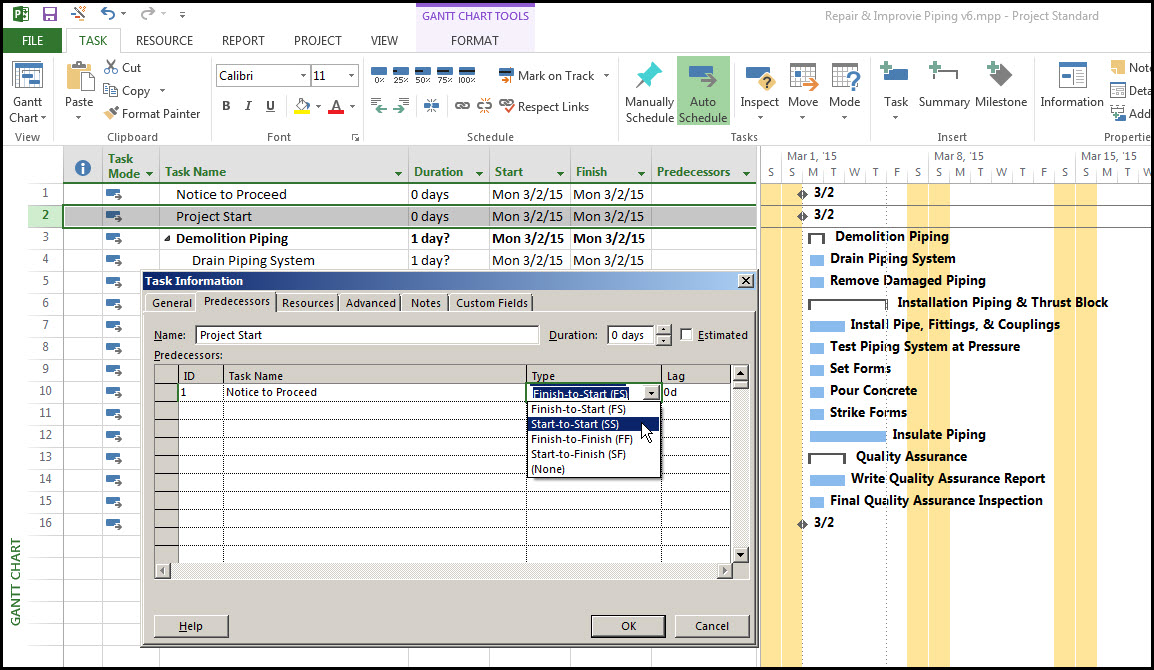 The relationship assignment between Project Start and Drain Piping System will be as shown in Figure 6. That’s it. Your Finish-to-Start relationship for these two tasks is applied as displayed in Figure 8. Again, your tasks with the Finish-to-Start relationship will be as shown in Figure 10. The result is in Figure 12.

Now we want to assign a lag between Pour Concrete and Strike Forms to give the concrete thrust block time to cure before we remove the forms. To insert a standard lag time type a number followed by the letter “d” in lowercase in the Lag column of the Task Information and Predecessors tab dialog. This is the input for the standard business time lag.

However, our lag is not standard. Our lag describes the cure time of concrete, which happens “round-the-clock” 24-hours a day. Microsoft Project has an elapsed time lag for modeling this type of “round-the-clock” lag. In the Lag column of the Task Information dialog for Predecessors, Figure 13, type in 5ed, which stands for five elapsed days. 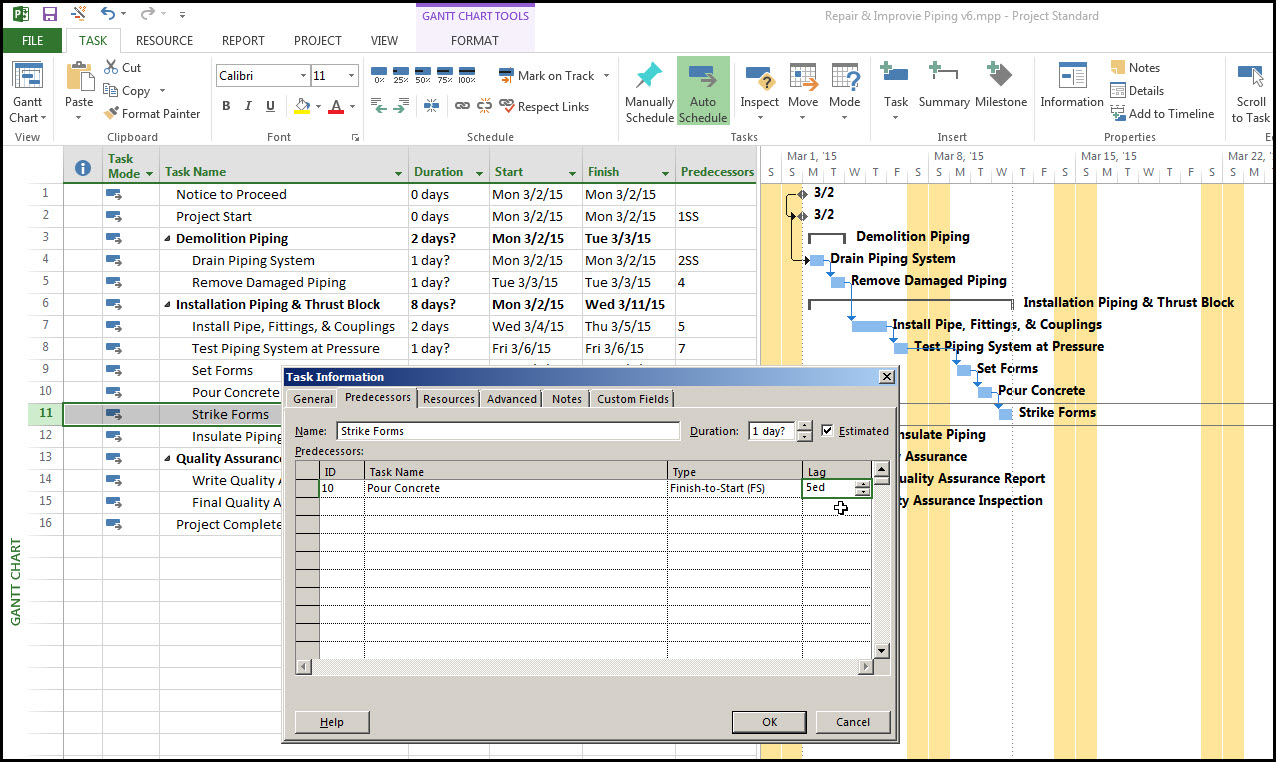 Click OK, and your elapsed time lag will be as displayed in Figure 14.

Next double click on the Gantt chart relationship arrow connecting the two tasks, and the Task Dependency dialog shall appear, Figure 16.

Simply change the type to Finish-to-Finish (FF), and the relationship will be as displayed in Figure 17. Round Out the Schedule

Complete the schedule by assigning a Finish-to-Start relationship between the remaining tasks, Figure 18. The project with assigned relationships will be as displayed in Figure 19.

You now have the true length of the schedule, which is compressed slightly via the tasks performed in parallel.

The standard Finish-to-Start relationship is the most common relationship type and Microsoft Project provides an icon button to insert this relationship. Insertion of the other types of relationships may require invoking the Predecessor tab in the split screen view.

Of course, another approach is to create a Finish-to-Start relationship and then edit it by doubling clicking on the Gantt chart relationship arrow, which brings up the Task Dependency dialog. So there is more than one way to insert a relationship in Microsoft Project. With practice you will find the quickest and most convenient way to create relationships for you and hope that this article will assist you in doing this.